This is part of an on-going series featuring the DHSC project team. This post features Dr Jonathan Benjamin, Associate Professor in Maritime Archaeology at Flinders University and Dr Mick O’Leary, Senior Lecturer in Marine Geosciences as the University of Western Australia. The two have been collaborating since 2016 and have spent the past three years with the DHSC team investigating the seabed in Murujuga (Dampier Archipelago).

I learned to dive in 2003 just before moving to Scotland where I undertook my Ph.D. in Archaeology at the University of Edinburgh. Before that, I had spent my undergraduate years studying four-field anthropology, with a focus on palaeoanthropology and archaeology, first at Boston University before completing my BA at UCLA. I loved archaeological fieldwork, language and travel, and so I minored in French and went on to study European prehistory at Edinburgh. There, I combined my interest in archaeology with underwater field methods, first in the cold waters of Scotland’s inland lochs, before shifting to the Mediterranean and warmer, saltier water. I wrote my Ph.D. on the Northern Adriatic, asking: where were the Neolithic and Mesolithic coastal sites in the region? I stayed focused on European prehistory for some time, before turning to the wider issues of coastal and underwater archaeology as a specialisation, working on sites and material culture from all chronological periods. That experience led to my appointment at Flinders University in 2014 when I took up a lectureship in the maritime archaeology program in Adelaide, South Australia, which I now call home (I am proudly a dual citizen). The role as Lead CI on the DSHC project has been a steep learning curve for me, working on a complex project with a large team and my first real experience in Australian archaeology and coastal geomorphology. I had my first cultural awareness inductions with the Traditional Owners and attended my first Council of Elders meetings as a guest of the Murujuga Aboriginal Corporation, who formally authorised their approval our project. Working in unfamiliar territory has been a challenge, but also an incredible opportunity to learn about landscapes and people, past and present.

The DHSC project is an international project with two case study areas. We’ve incorporated method and theory from both Australian archaeology and from Europe, where submerged landscape studies has matured into a bona fide sub-discipline of archaeology and marine geosciences, with considerable contributions from the SPLASHCOS Network and my mentor and DHSC Senior Scholar Prof Geoff Bailey. The landscapes where we have worked during DHSC, in Denmark and northwest Australia, could not be more contrasting. Yet the archaeology, and the ways we study past cultures, has made for some remarkable and though-provoking comparisons. Worldwide, ancient coasts and their human inhabitants were significantly impacted by rising sea levels during the last glacial period, and subsequent warming into the early Holocene. By working with local specialists and studying the evolving coasts we can consider the impacts of marine transgression on past peoples and the archaeological sites they left behind thousands of years ago. The Australian sun is no joke! (photo: S. Wright)

Suffice it to say, that the move from Northern Europe to work in the heat of north-western Australia took some acclimation! Fieldwork in Australia is very different, but it is also incredible. The country is magnificent, and its archaeology is ancient and beautiful. Diving in a region that is warm and plentiful in marine life has been a pleasure, though we have had to take a few extra precautions due to the size of some of the local fish! Fortunately for us, they are well fed and shy. Despite these beautiful distractions, and the ever-present need to consider health and safety of our team during all our operations, our scientific diving has remained firmly focused on the search for submerged cultural heritage and drowned archaeology.

Amongst the most rewarding aspects of the DHSC project has been working with our team, in particular Mick O’Leary who has taught me an incredible amount about geomorphology, both generally and as a regional expert on the northwest shelf. ‘I will never again go into the field without a geomorphologist!’ I remember saying during one of our field campaigns that we have co-directed over the past several years in Murujuga (Dampier Archipelago). Indeed, a good geomorphologist is worth their weight in gold! It is especially great to be able to stand on the bow of a boat and discuss physical landscape evolution, and review how and where underwater archaeological site preservation is most likely to occur. For an archaeologist working on submerged landscapes, this is priceless and has led to a great collaboration and joint supervision of talented emerging scholars in submerged landscape studies.

It is also a big job to undertake a major scientific diving operation as part of a research project like this one. Seeing our research students and early career colleagues, who represent the next generation in archaeology, emerging into specialists in their own right has been incredibly fulfilling, and fun! I am fortunate to have had a great team of colleagues and students to work with during the DHSC project. Working on these ancient submerged landscapes in collaboration with the local TOs and with a team of such enthusiastic researchers and emerging scholars has been an honour.

Dive tanks must be filled at the end of each day (photo: S. Wright) 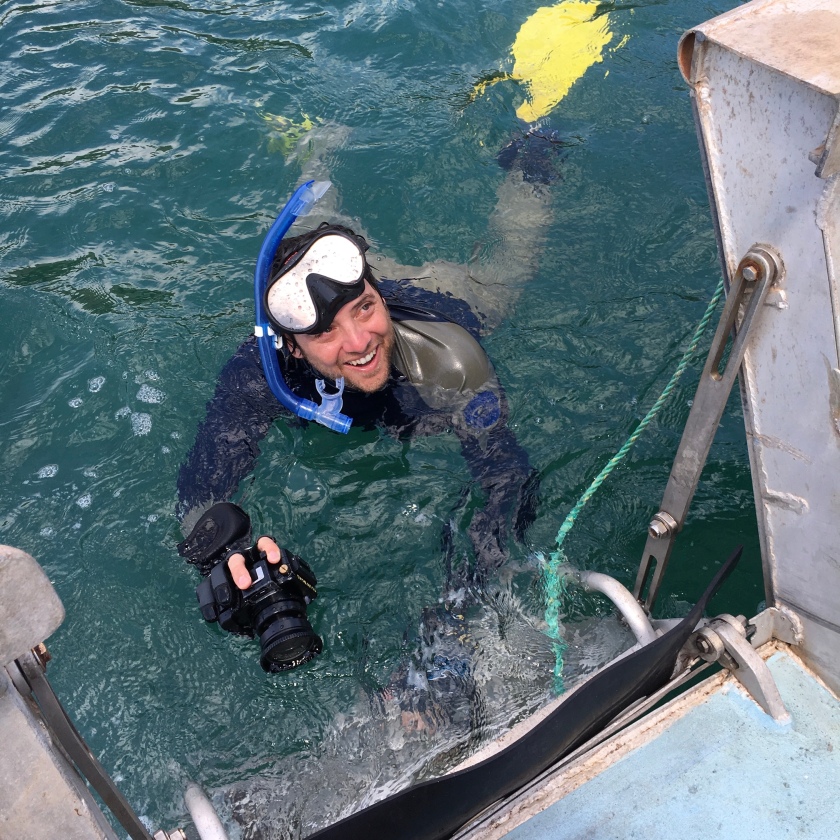 As a marine geoscientist with research expertise in the fields of tropical coastal geomorphology, coral reef and reef-island evolution, and climate change I have been in charge of the geo-scientific and landscape evolution elements of the DHSC project. I studied at JCU, earning a BSc (Hons) and PhD in 2007 before being awarded a three year Leverhulme Trust Post Doctoral Fellowship at Manchester Metropolitan University in the UK. I went on to undertake on a Research Fellowship at Boston University (USA) before going on to work at Curtin University and now UWA. I have held a leadership role as CI on the DHSC Project since its inception and worked alongside my archaeological colleagues to help understand the region, its natural and cultural histories.

My main research focus is on ancient sea-level reconstructions during periods of known climate instability. And although I mostly focus on past sea levels, the data we collect can also be used to inform, future sea-level rise and their impacts.

Working on the DHSC and its research objectives since the beginning has required a multidisciplinary, synergistic approach to fieldwork and project planning. We have applied traditional elements of geomorphology, sedimentology and palaeoecology, high resolution geochronological methodologies with cultural and archaeological method and theory. In this respect, the DHSC project has been a true geoarchaeological project, with its results reflecting the various disciplines and perspectives represented by this team. We’ve gotten to know a range of people and colleagues and have shared many long days aboard our local charter vessel. 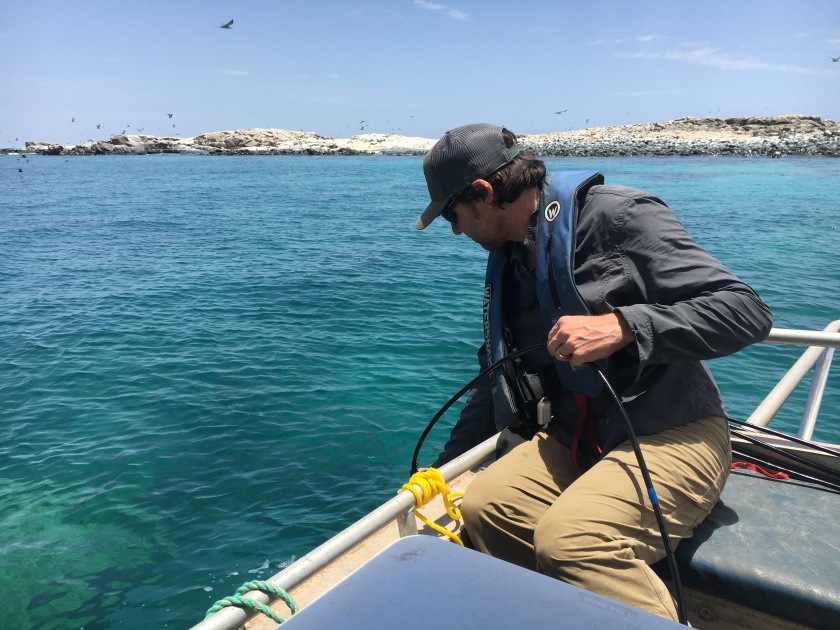 Dr Mick O’Leary operating the drop-camera during DHSC fieldwork. Mick’s hot tip: never keep your car keys in your shirt pocket while working on a boat!

Fieldwork is fun but exhausting! We are up early, on the boat and going back and forth between islands. The days can be long but are also very rewarding. And discovery of new sites and new ideas never gets old. The DHSC project has been a great opportunity to jump in and get wet, quite literally! And working in Murujuga in consultation with the Traditional Owners has been a privilege. The DHSC project has also opened up a new frontier in archaeology, bridging geo-sciences with maritime archaeology in a way that has never been done before. It is something we can be proud of and will surely look back in future years to come with fondness and respectful appreciation to the team, the TOs and the local community. 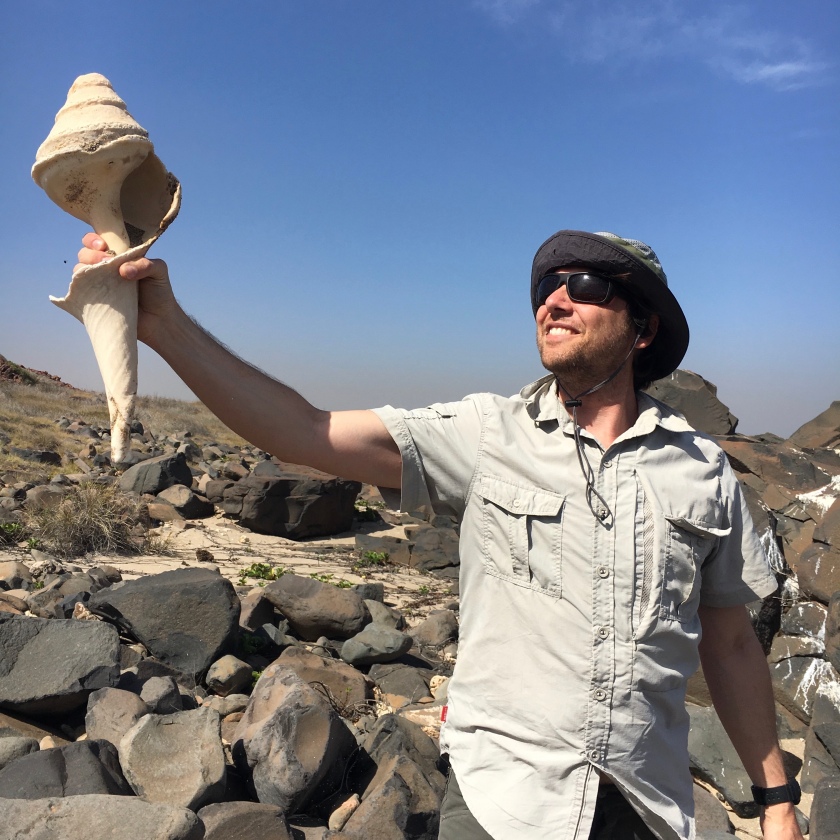