As a PhD candidate on the DHSC project my research focuses on an international comparative study of submerged landscapes. I am starting with an existing knowledge of the submerged Neolithic sites off the Carmel Coast of Israel, an area I have studied for some time and on which I wrote my Honours thesis. Understanding how these sites were formed, transgressed by postglacial sea-level rise, and preserved – eventually to be found and recorded by archaeologists, will help me to complete my aim to compare these submerged sites with prospective areas in other areas around the world, including in the DHSC study area in NW Australia. In a similar way to the DHSC project’s ongoing work in Denmark, this allows us to move from a known example of submerged landscape archaeology in the Eastern Mediterranean, learn from it, and extrapolate what I can to better understand the potential in Australia.

I began my PhD in early 2018 and while it has certainly been a steep learning curve, it has also been immensely rewarding. In April 2018, I attended the meeting of the Scientific and Technical Advisory Body for the UNESCO 2001 Convention on the Protection of Underwater Cultural Heritage, held in Paris, France. I also took the minutes for the meeting of the UNESCO UNITWIN Network for Underwater Archaeology. Both meetings provided an ideal opportunity to learn more about the increasingly global community involved in underwater archaeology, and to be present for the discussions surrounding the implementation of the 2001 Convention. Amongst the subjects raised at both meetings was the upcoming Decade of Ocean Science (2021-2030), and the involvement of the underwater cultural heritage community. There is certainly potential for the contribution of submerged landscape research, with both meetings emphasising the integration of underwater cultural heritage with spatial planning, and the development of palaeoenvironmental knowledge bases.

In May/June and again in September/October of last year, I assisted with a series of marine geophysical surveys conducted by the DHSC team in the Dampier Archipelago. Along with other members of the project team, I spent several weeks conducting surveys with a sidescan sonar to better understand the features at the bottom of the ocean around the Dampier Archipelago. The sidescan sonar provides high resolution imagery of the sea floor, allowing the team to analyse the seabed textures and associated features as we refine our survey strategy to analyse submerged landscapes. We’re now working through the data to search for areas which might be conducive to the preservation of archaeological material, and other noteworthy features on the seabed.

Also in 2018, I joined the DHSC team in Hjarnø, Denmark, where I assisted Francis Stankiewicz and Paul Baggaley in conducting sidescan sonar and sub-bottom profiler surveying. The data from these surveys will be analysed alongside marine sediment cores, and this combination of marine geophysics and coring provides information about how sediments developed over time, and allows us to reconstruct the past (now submerged) landscape. I was also able to join the underwater team and assist in the excavation of a submerged Mesolithic settlement. This field season marked an important milestone for me: my first dives on a submerged prehistoric site. The bulk of my undergraduate training was in terrestrial archaeology, so I learned to dive specifically to transfer my archaeological abilities to underwater prehistory. The cultural material obtained from these sites is remarkably preserved, and the knowledge to be gained from the analysis of submerged sites is critical in furthering our understanding of human interactions with the marine and coastal environment.

Last July, I travelled to Israel, where I joined a team of researchers on the Bronze and Iron Age site of Tel Dor to undertake further training in underwater archaeological methods. The Near East has an extraordinary amount of archaeological material in both the terrestrial and underwater environment, and the team at Dor aims to integrate the data from its terrestrial and underwater excavations for a rounded view of the maritime history of Dor. We also held a 2019 joint field school between Flinders University and the University of Haifa as part of the UNESCO UNITWIN Network for Underwater Archaeology.

In the past year of eclectic experiences in underwater archaeology in different parts of the world, it has become especially evident that international and interdisciplinary collaboration is key not only to my own professional development, but to undertaking well rounded and widely contextualised archaeological research. It is especially important to me as well as to the DHSC team, in our efforts to illuminate and better understand the submerged past. 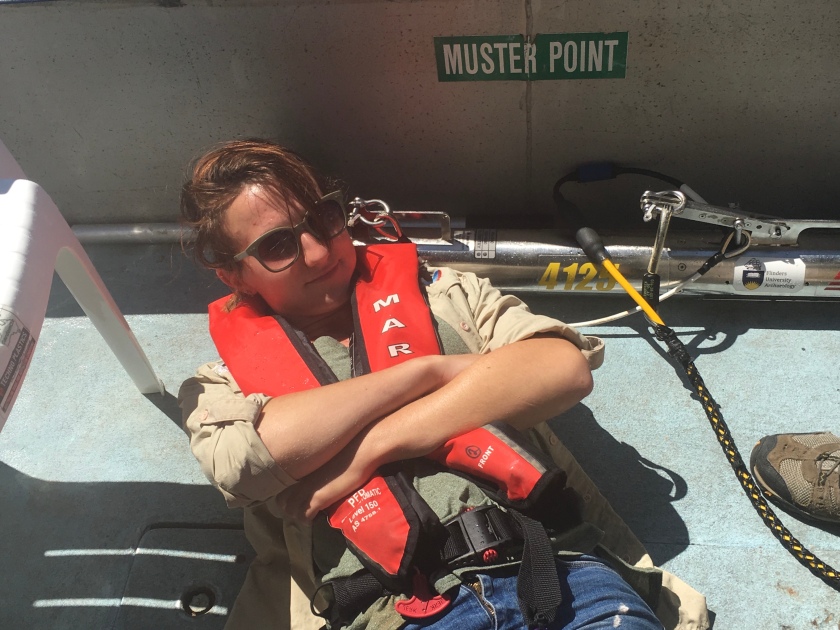