This article was originally published on The Conversations. Read the original article.

With global sea levels expected to rise by up to a metre by 2100 we can learn much from archaeology about how people coped in the past with changes in sea level.

In a study published this week in Quaternary Science Reviews, we looked at how changes in sea level affected different parts of Australia and the impact on people living around the coast.

The study casts new light on how people adapt to rising sea levels of the scale projected to happen in our near future.

More than eight out of every ten Australians live within 50km of the coast.

The Intergovernmental Panel on Climate Change says global sea levels may increase by more than 8mm/year, four times the average of the last century.

A major challenge for managing such a large increase in sea level is our limited understanding of what impact this scale of change might have on humanity.

While there are excellent online resources to model the local physical impacts of sea level rise, the recent geological past can provide important insights into how humans responded to dramatic increases in sea level.

At the height of the last ice age some 21,000 years ago, not only were the Greenland and Antarctic ice sheets larger than they are today, but 3km-high ice sheets covered large parts of North America and northern Europe.

This sucked vast amounts of water out of our planet’s oceans. The practical upshot was sea level was around 125m lower, making the shape of the world’s coastlines distinctly different to today.

As the world lurched out of the last ice age with increasing temperatures, the melting ice returned to the ocean as freshwater, dramatically increasing sea levels and altering the surface of our planet.

Arguably nowhere experienced greater changes than Australia, a continent with a broad continental shelf and a rich archaeological record spanning tens of millennia.

For most of human history in Australia, lower sea levels joined mainland Australia to both Tasmania and New Guinea, forming a supercontinent called Sahul. The Gulf of Carpentaria hosted a freshwater lake more than twice the size of Tasmania (about 190,000km2).

Our study shows that lower sea levels resulted in Australia growing by almost 40% during this time – from the current landmass of 7.2 million km2 to 9.8 million km2.

The coastlines also looked very different, with steep profiles off the edge of the exposed continental shelf in many areas forming precipitous slopes and cliffs.

Imagine the current coastline where the Twelve Apostles are on Victoria’s Great Ocean Road and then extend them around much of the continent. Many rivers flowed across the exposed shelf to the then distant coast. 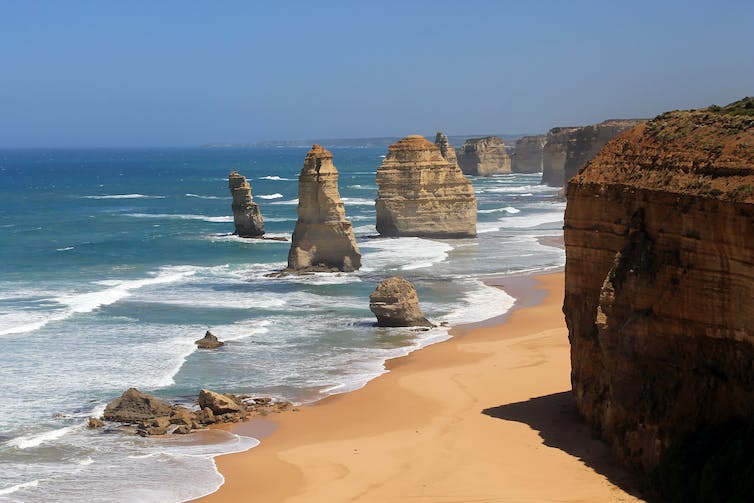 The steep cliffs at the Apostles, off Victoria’s Great Ocean Road, look like parts of the ancient coastline of Australia. Flickr/portengaround, CC BY-SA

When things warmed up

Then between 18,000 and 8,000 years ago, global climate warmed, leading to rapid melting of the ice sheets, and seeing sea levels in the Australian region rising from 125m below to 2m above modern sea levels.

We found that 2.12 million square km, or 20-29% of the landmass – a size comparable to the state of Queensland – was lost during this inundation. The location of coastlines changed on average by 139km inland. In some areas the change was more than 300km.

Much of this inundation occurred over a 4,000-year period (between 14,600 and 10,600 years ago) initiated by what is called Meltwater Pulse 1A, a period of substantial ice sheet collapse releasing millions of cubic litres of water back into the oceans.

During this period, sea levels rose by 58m, equivalent to 14.5mm per year. On the ground, this would have seen movement of the sea’s edge at a pace of about 20-24m per year.

Impacts of past sea level rise

The potential impacts of these past sea-level changes on Aboriginal populations and societies have long been a subject of speculation by archaeologists and historians. 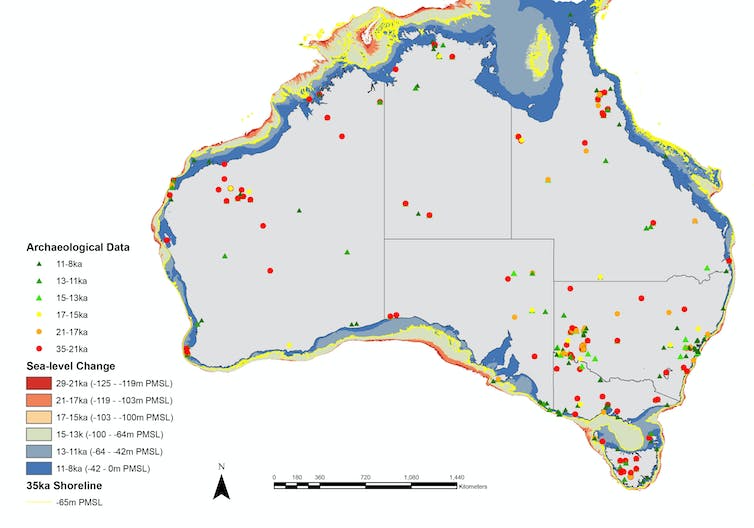 In his 1970s book Triumph of the Nomads: A History of Aboriginal Australia, the Australian historian Geoffrey Blainey hypothesised that:

Most tribal groups on the coast 18,000 years ago must have slowly lost their entire territory […] a succession of retreats must have occurred. The slow exodus of refugees, the sorting out of peoples and the struggle for territories probably led to many deaths as well as new alliances.

Archaeologists have long recognised that Aboriginal people would have occupied the now-drowned continental shelves surrounding Australia, but opinions have been divided about the nature of occupation and the significance of sea-level rise. Most have suggested that the ancient coasts were little-used or underpopulated in the past.

Our data show that Aboriginal populations were severely disrupted by sea-level change in many areas. Perhaps surprisingly the initial decrease in sea level prior to the peak of the last ice age resulted in people largely abandoning the coastline, and heading inland, with a number of archaeological sites within the interior becoming established at this time. 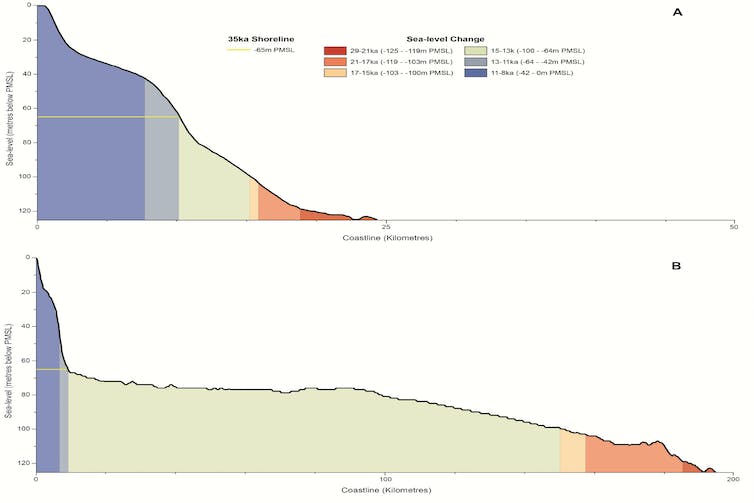 During the peak of the last ice age, there is evidence on the west coast that shows people continued to use marine resources (shellfish, fish etc) during this time, albeit at low levels.

With the onset of the massive inundation after the end of the last ice age people evacuated the coasts causing markedly increased population densities across Australia (from around 1 person for every 355 square km 20,000 years ago, to 1 person every 147 square km 10,000 years ago).

Rising sea levels had such a profound impact on societies that Aboriginal oral histories from around the length of the Australian coastline preserve details of coastal flooding and the migration of populations.

We argue that this squeezing of people into a landmass 22% smaller – into inland areas that were already occupied – required people to adopt new social, settlement and subsistence strategies. This may have been an important element in the development of the complex geographical and religious landscape that European explorers observed in the 18th and 19th centuries.

Following the stabilisation of the sea level after 8,000 years ago, we start to see the onset of intensive technological investment and manipulation of the landscape (such as fish traps and landscape burning).

We also see the formation of territories (evident by marking of place through rock art) that continues to propagate up until the present time. All signs of more people trying to survive in less space.

Read more: Buried tools and pigments tell a new history of humans in Australia for 65,000 years

So what are the lessons of the past for today? Thankfully, we can show that past societies survived rapid sea level change at rates slightly greater than those projected in our near future, albeit with population densities far lower than today.

But we can also see that sea level rise resulted in drastic changes to where people lived, how they survived, what technology they used, and probable modifications to their social, religious and political ways of life.

In today’s world with substantially higher population densities, managing the relocation of people inland and outside Australia, potentially across national boundaries, may provide to be one of the great social challenges of the 21st century.

Note, this article was amended on Friday 19 January 2018 at the request of the authors to correct the IPCC’s projected rise in global sea levels.