Katie Woo and Katarina Jerbic are PhD students from two Australian universities. They join the DHSC core team here in Hjarnø this month to contribute to the project and to learn about submerged archaeology in a new environment. Both Kat and Katie focus their own research on past environments and their influence on prehistoric human populations. This week they undertook the task to core marine sediments at a new site in order to characterise the formation and distribution of geological and cultural sediments.

Kat finished her MA in Archaeology and Ethnology at the Faculty of Humanities and Social Sciences at the University of Zagreb, Croatia in 2009. Participation in prehistoric digs excavations throughout her university years resulted in a keen interest in prehistoric archaeology. Her MA thesis, which focussed on the prehistoric pottery of the Jačmica cave, led to an on-going position at the Archaeological Museum of Istria in Pula. That’s when she began excavating a 6000-year-old submerged prehistoric pile-dwelling settlement in Zambratija Bay in the Adriatic Sea, which resulted in her training to be a diver to help assist with the recording of the site. That led to an opportunity to undertake a PhD at Flinders University. Katarina’s contribution to this year’s fieldwork in Hjarnø was to core the seabed around the excavation trenches in order to determine the extents of the cultural layers as well as to reconstruct the past sea-level change on the site by looking at the presence of microfossils in the cultural sediment layers from the site.

Katie is an archaeomalacologist (shellfish analyst) doing her PhD at the University of Sydney.  Her research focusses on shell midden sites located in Western Arnhem Land, in the north of Australia.  She is using a combination of archaeological, ecological, and biological data to reconstruct the diets, landscape use patterns, and environmental impacts of the groups inhabiting the area throughout the Early to Mid-Holocene (9000-2000 years ago). Previous excavations in Hjarnø have uncovered a significant amount of shellfish material which relates to the Ertebølle Culture. Katie was invited to join the Deep History of Sea Country project to analyse the shellfish material, and to bring a new perspective to the study.

Their main role so far has been to collect data to reconstruct the development of the sediments in the fjord. The layers found within these cores have been described, drawn and photographed for documentation. This data will then be compared with the sub-bottom and side scan sonar data, being collected by the marine geophysicists, to reconstruct how the sediments in the fjord have been laid down over time. 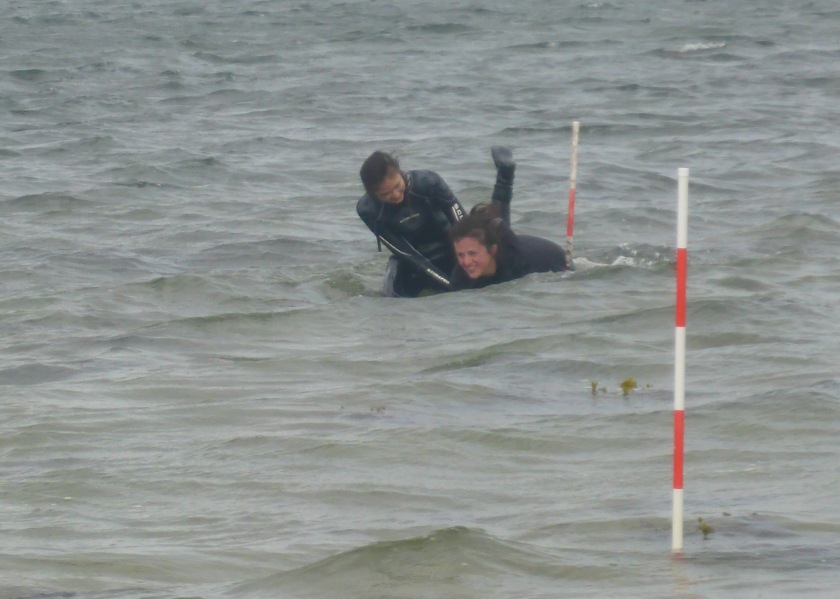 Kat and Katie have been enjoying their time on the fieldwork, learning from each other as well as the rest of the team. They are looking forward to integrating their results with the rest of the team’s data to help answer questions about the submerged prehistoric past.